Tweet volumes peaked within the first hour when the album was released, generating 1.2 Million Tweets from 6pm to 7pm (KST) on 21 February. The Top Tweet from BTS (@BTS_twt) official account was 'D-Day', announcing the day of their comeback with a series of photos including a selfie from RM and various artworks.

With the BTS ARMY going wild on Twitter, the top hashtags excluding #BTS and #* was the album title #MAP_OF_THE_SOUL_7, Next on the list is #BTSComeback2020 and lead single, #ON.

Fans all over the world turned to Twitter to join the #MAP_OF_THE_SOUL_7 conversations and #BTS updates. Come and join Twitter conversation today to see and talk about your favourite Kpop idols and stay updated everyday with other Kpop fans around the world!

Twitter, Inc. (NYSE: TWTR) is what's happening in the world and what people are talking about right now. On Twitter, live comes to life as conversations unfold, showing you all sides of the story. From breaking news and entertainment to sports, politics and everyday interests, when things happen in the world, they happen first on Twitter. Twitter is available in more than 40 languages around the world. The service can be accessed at twitter.com, on a variety of mobile devices and via SMS. For more information, visit about.twitter.com or follow @TwitterKorea. For information on how to download the Twitter and Periscope apps, visit twitter.com/download and periscope.tv.

* Some terms in this release are displayed in Korean as indicated with asterisk. Please refer to the full release at https://www.media-outreach.com/View/28861/ 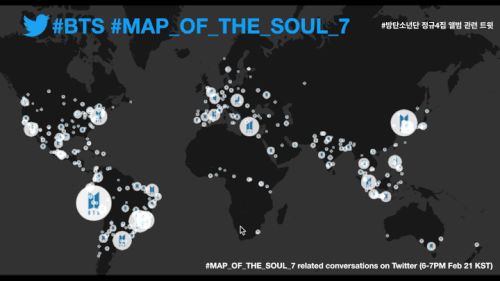