The Secretary for Commerce and Economic Development, Mr Edward Yau, speaks via video on the huge potential of the Guangdong-Hong Kong-Macao Greater Bay Area and encourages Australian enterprises to seize the abundant opportunities in his keynote speech during the symposium "Hong Kong: Your Greater Bay Area Partner in Expanding Your Global Business" hosted by Invest Hong Kong in Sydney today (March 1).

The Director-General of Investment Promotion at Invest Hong Kong (InvestHK), Mr Stephen Phillips, delivers welcoming remarks via video during the symposium "Hong Kong: Your Greater Bay Area Partner in Expanding Your Global Business" in Sydney today (March 1), revealing the vast business potential and the composite advantages of Hong Kong in the emerging market of the Guangdong-Hong Kong-Macao Greater Bay Area.

The Commissioner for the Development of the Guangdong-Hong Kong-Macao Greater Bay Area, Mr Tommy Yuen, gives a keynote speech via video during the symposium "Hong Kong: Your Greater Bay Area Partner in Expanding Your Global Business" in Sydney today (March 1).

The symposium focused on the attractiveness of the Guangdong-Hong Kong-Macao Greater Bay Area (GBA) as well as the strategic role of Hong Kong in the overall development of the GBA. It brought together the Director of the Australian Chamber Business Leaders Council, Mr Paul Nicolaou, and other speakers renowned in their respective fields to share insights.

The Secretary for Commerce and Economic Development, Mr Edward Yau, talked in his online keynote speech about the huge potential of the GBA and encouraged Australian enterprises to seize the abundant opportunities. He said that, as quoted in studies, while the GBA constitutes only 1 per cent of land in the entirety of China and has 5 per cent of the country's population, it produces 12 per cent of the nation's GDP, and exports 37 per cent of national trade.

"Connectivity through extensive efficient railway systems plus world-class airports and container ports and telecom networks within the GBA provides a solid foundation for it to thrive as a major economic engine of the country. While the 11 cities pursue a common goal of building the GBA into the best bay area in the world, they play different functions as a holistic cluster. Green and sustainable development will be another driver of the GBA in attracting international businesses. By various estimates, the GBA's GDP will grow to top US$4.7 trillion by 2030, presenting growth potential that Australian companies should not be missing," Mr Yau said.

Another keynote speaker, the Commissioner for the Development of the Guangdong-Hong Kong-Macao Greater Bay Area, Mr Tommy Yuen, said via video, "Hong Kong, under 'one country, two systems' and armed with the GBA development plan is ideally placed to contribute to and benefit from both. Hong Kong will focus on better integration into the country's domestic market, taking the GBA development as an entry point, and will proactively strengthen our role as a facilitator to link up the domestic circulation and the international circulation. Playing the dual role well will bring continuous impetus to Hong Kong's economy. Businesses that operate in Hong Kong will hence be able to take full advantage of not just what Hong Kong has to offer but what the GBA market can offer."

The Director of the Hong Kong Economic and Trade Office in Sydney, Ms Winnie Chan, and the Director-General of Investment Promotion at InvestHK, Mr Stephen Phillips, delivered welcoming remarks. Mr Phillips, speaking via video, revealed the vast business potential and the composite advantages of Hong Kong in the emerging market of the GBA. "The GBA in my opinion is the most exciting economic development plan in this planet. It is home to 72 million consumers and many of the country's most innovative companies, and backed by the leading international financial centre status of Hong Kongas well as all other dynamic economic clusters. The intra-regional trade and investment flows, especially between the GBA and ASEAN, present many new opportunities ahead," he said.

Other speakers at the symposium included the Managing Director and Group CEO of the University of Wollongong Global Enterprises, Ms Marisa Mastroianni, who discussed her experience on how to leverage Hong Kong to extend the university's global network of higher education institutions. The CEO and Founder of AirTrunk, Mr Robin Khuda; Partner in Tax of KPMG Hong Kong and Head of Alternative Investments of KPMG China Mr Darren Bowdern; the National President of Australia China Business Council, Mr David Olsson; and the Director of Philanthropy and Government Relations of the Fred Hollows Foundation, Mr Michael Allen, also talked about the unparalleled opportunities in Hong Kong during the panel discussion moderated by the Chairman, Global Engagement of the Business Council of Australia, Mr Warwick Smith.

InvestHK is the department of the Hong Kong Special Administrative Region Government responsible for attracting foreign direct investment and supporting overseas and Mainland businesses to set up or expand in Hong Kong. It provides free advice and customised services for overseas and Mainland companies. For more information, please visit www.investhk.gov.hk. 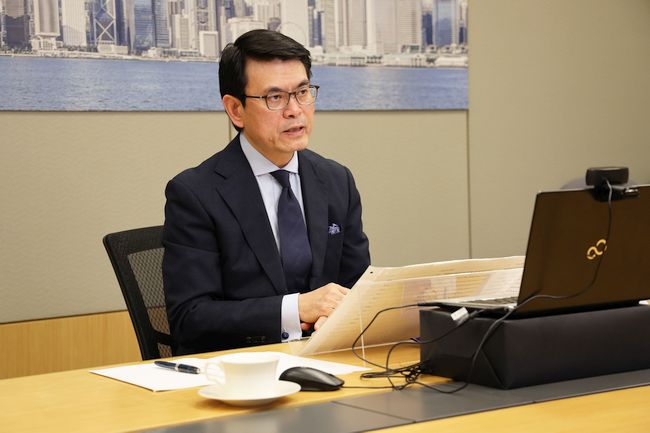