Paice was an early leader in electrified vehicles. The company was awarded its first hybrid vehicle patent in 1994, long before most automakers began seriously focusing on ways to improve fuel efficiency and reduce emissions. Paice's technology proved valuable and helped accelerate the growth of the hybrid vehicle industry. An independent analysis concluded that Paice owns the most dominant hybrid vehicle patents in the world.

"We've reached several licensing agreements in the past two years without the need for litigation. These agreements make a lasting impact in our community by supporting the good works of the Abell Foundation," said Paice Executive Chairman Frances Keenan.

During the company's early years, Severinsky worked closely with two experienced automotive veterans: Bob Templin, a Paice board member who had served as chief engineer of Cadillac and technical director of GM's Research Laboratory; and Ted Louckes, a 40-year veteran of General Motors who served as Paice's Chief Operating Officer and was instrumental in developing Paice's hybrid technology alongside Dr. Severinsky.

Dr. Alex Severinsky, a Russian immigrant, founded Paice in 1992 with the support of the University of Maryland. The company has been awarded 30 U.S. and foreign patents. It has licensing agreements with many of the world's leading automakers.

About the Abell Foundation (www.abell.org)

The Abell Foundation, a Baltimore-based charitable organization dedicated to fighting urban poverty and promoting social objectives by investing in progressive local start-ups, is a co-owner of the Paice patents. Since 1999, Abell has helped support Paice's efforts to develop and promote its hybrid technology.

TOKYO, May 29, 2020 - (JCN Newswire) -  Sharp Corporation has announced the decision, made at a meeting of the Board of Directors convened today, to spin off the Display Device Business Division. 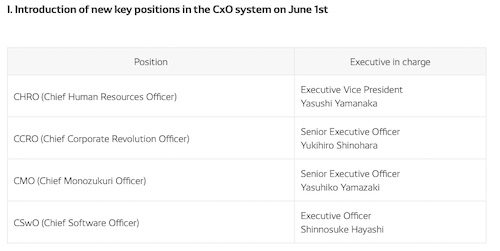 KARIYA, JAPAN, May 29, 2020 - (JCN Newswire) -  DENSO Corporation today announced the addition of four new key positions in the CxO system as of June 1st and personal changes as follows.