BEIJING, May 18, 2021 - (JCN Newswire) -  The AMiner team of Tsinghua University released "2021 AI Most Influential Scholar Annual List" ("AI 2000 List" for short). The AI 2000 List aims to select the most influential and active top-cited scholars from the field of artificial intelligence worldwide over the past ten years based on AMiner academic data.

The 2021 selection was based on the big data of a total of 178,254 papers and 204,483 authors collected from 49 top journals and proceedings from the field of artificial intelligence over the ten years from 2011 to 2020. The list has been automatically generated by intelligent algorithms to obtain 200 scholars named "AI 2000 Most Influential Scholars" and 1,800 scholars named "AI 2000 Most Influential Scholars Honorable Mention".

This year's 200 Most Influential Scholars and 1,800 Nominated Scholars came from different institutions around the world. Since one scholar can be nominated in different subfields, the total number of AI 2000 most influential scholars is 1,651 after de-duplication.

In terms of the countries represented, the list is dominated by 1,163 American scholars, accounting for 58.2%, over half of the total number. China ranks second after the US, with 223 scholars on the list, accounting for 11.2%. Germany ranks third, with the largest number of scholars in Europe. The other top ten countries in the number of scholars are the UK, Canada, Singapore, Australia, Switzerland, France, and Israel.

Regarding the number of AI 2000 Most Influential Scholars, companies like Google and Microsoft have more AI scholars and nominations than universities. Google, topping the list with a total of 135 scholars, is the only institution that has more than one hundred scholars. In addition, 80 scientists on the list are from Microsoft. The only Chinese research institution that can rival these companies is Tsinghua University with 39 scientists on the list.

As for gender characteristics, male scholars outnumbered their female counterparts on the AI 2000 List. Male scholars are in the majority in all fields of AI, with a total of 1,774 scholars (88.6%); the total number of female scholars is only 180. Given that one scholar may be nominated in different fields, the data after de-duplication show 1,501 males and 154 females, and the male-female ratio is about 9.7:1.

Of the global AI 2000 scholars, 1,163 are from the US and 223 from China, ranking first and second in number. Although the number of American scholars on the list this year is 6% lower than that of last year, the US still takes the lead in the overall human resources of artificial intelligence and high-level research achievements, which has laid a solid talent foundation for the development of artificial intelligence in the US.

Currently, China is the country with the greatest enthusiasm for AI research. Despite the second place, China still lags far behind the US, and therefore it is imperative to strengthen the building of AI talent pools.

The AI Most Influential Scholar Annual List aims to select the 2,000 most influential and active top scholars from the field of artificial intelligence around the globe based on AMiner academic data in the coming 10 years.

By sticking to its original aspiration of "exploring the academic world and promoting disciplinary development", the AMiner team at Tsinghua University has built global academic knowledge maps based on data and automatically generated the list using AI technology in the principles of objectivity and fairness. 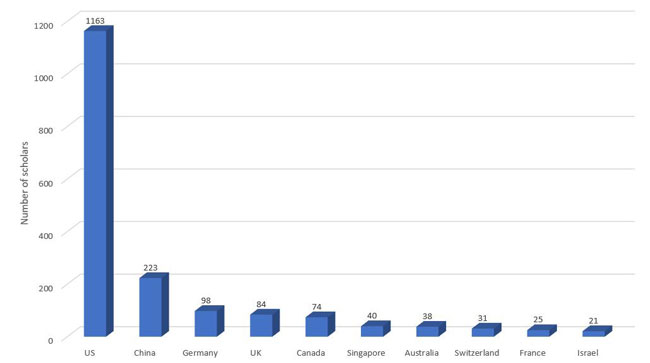 ScoopAsia
—
The Release of 2021 AI Most Influential Scholar (2000 Scholars) Annual List: the US Takes the Lead, Closely Followed by China and Germany
Share this