HONG KONG, Dec 15, 2020 - (ACN Newswire) -  ATAL Engineering Group ("ATAL" or the "Group"), a leading electrical and mechanical ("E&M") engineering service provider in Hong Kong, today announced that its subsidiary Anlev Elex Elevator Limited ("Anlev") has won the first place in ELEVATOR WORLD "2021 Project of the Year" contest with the Central-Mid-Levels Escalator and Walkway System modernisation project, and became the only winning Asian company this year. The award is the latest recognition of Anlev's world-class professionalism and service excellence.

Figure 2: Anlev, a subsidiary of ATAL, was appointed to carry out the modernisation works for the Central-Mid-Levels Escalator and Walkway System.

Figure 3: ELEVATOR WORLD's result confirmation letter for the "2021 Project of the Year" Contest.

The "2021 Project of the Year" contest consisted of nine categories and attracted entries from all over the world. By evaluating each entry against the criteria of innovation, originality and creativity, challenges overcome, installation methods and techniques, as well as the use of advanced technology, the judging panel awarded the first place in "Escalators, Modernisation" category to Anlev's Central-Mid-Levels Escalator and Walkway System modernisation project. Detailed stories of the winning entries will be published in the January 2021 issue of ELEVATOR WORLD.

Dr. Otto Poon Lok-to, Chairman of ATAL Engineering Group, is delighted to see the Group receiving industry recognition in the international arena. He gives credit to the project team for the achievement and said, "In handling the Central-Mid-Levels Escalator and Walkway System project which covers over 800 metres in distance, elevates 135 metres through the street hillside, and serves over 78,000 people on daily basis, the project team faced many challenges, we tackled them with meticulous precision and utmost consideration for the many stakeholders. I am proud of them for overcoming the hardship while maintaining a high level of satisfaction for the neighbourhood."

The Central-Mid-Levels Escalator and Walkway System in Hong Kong is the longest outdoor covered escalator system in the world. It connects nine streets at the heart of the city and has been a tourist attraction and an essential commuter service since it came into service in 1993. The system consists of a series of 18 escalators and three inclined moving walkways connected in places by footbridges, providing better commute for people residing and working in the area.

After some 25 years of relentless service to the community, the system needs refurbishment and upgrade. Anlev was then appointed by the Hong Kong SAR government to carry out the modernisation works, providing technical know-how and system replacement for the government's first major renovation of the escalator and walkway system since it was inaugurated. The modernisation of the entire escalator and walkway system was divided into 12 phases. The works commenced in 2018 and is slated for completion in 2022.

About Anlev Elex Elevator Ltd
Anlev Elex Elevator Ltd ("Anlev") is a subsidiary of ATAL Engineering Group, specialising in the design, supply, installation of lifts and escalators, as well as maintenance repair and modernisation projects. In addition to providing standard equipment, Anlev Elex also provides vertical transportation solutions for barrier-free access for the disabled, including stair lifts, lift platforms and lifts designed specifically for the disabled. 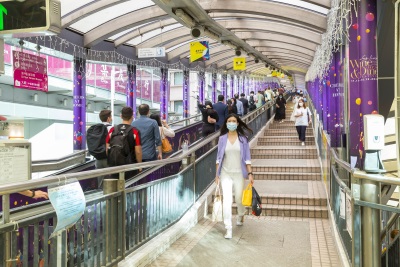