TOKYO, Mar 24, 2020 - (ACN Newswire) -  On March 6th Azabu Insights proposed a theory that coronavirus seemed to be spreading faster in cold countries than in warm countries. We followed this up with an update on March 11th showing that at that time the data was showing ninety-eight percent of the cases were all in cold countries.

Since then we have had many comments from different people. One very respected business person who works in life sciences, told us he thought it was a, "multivariate problem," and suggested that, "It's possible, for example, that infection rate would be strongly correlated with people meeting in enclosed areas will less have outside air circulation."  He was saying that our analysis might be true but it might not be, "because of the temperature," but because of something that "relates to temperature."

Another doctor said he thought it was because in spring people go outside more and they are less impacted by the dry air of air conditioning systems.

One hospital vice president, whom we highly respect, responded politely, "I do not think that COVID-19 relates to temperature."

Our conclusion on March 11th was: "As previously, we conclude that COVID-19 can spread in warm regions but seems to spread much more quickly in colder regions. We hope that countries and regions around the world will aggressively work to keep the virus at bay until the summer months and hope that the warm temperatures will support further containment."

As recently as March 21, a virologist, Christian Drosten, who advises the German government in their so-far successful tackling of the coronavirus crisis, expressed some optimism that in the coming months we may have some success beating the virus. When asked about the effect of temperature, he responded: "This effect isn't likely to be particularly pronounced. It won't be able to stop the outbreak, but it may help a bit. And combined with the isolation measures, I strongly expect that we will see an impact in a month." It seems he also was not 100% convinced that higher temperature in summer months would solve things, but he thought it could help and envisioned more success at beating the virus spread in weeks ahead.

On the other hand, we have had people recently coming to us and saying that they've heard that there are more outbreaks in warm countries, like Malaysia and Brazil recently. They ask, "doesn't this prove the theory wrong?"  So, we wanted to take a third look at the data and see what it says now and try to figure out what it means. Here are the results.

First off, the cold countries have moved more to the top of the cases list. The top fifteen countries are now all cold countries, as are twenty-two of the top twenty-five countries by case count.

On a percentage basis, today still ninety-six percent of cases have been in cold countries with only four percent in warm countries.

Please refer to the charts which illustrate this information.


Countries and Regions That Have Beaten The Virus

The warm countries of Singapore and Hong Kong, had initially had high case counts, ranking number 17 and 18 for most cases as of March 8th. Countries like these have shown that the virus can essentially be stopped. Singapore now has the 40th most cases and Hong Kong has the 50th most cases. But we feel that they probably beat the virus as much because they dealt very aggressively with it as because of the warm weather there.

After  all, China and Korea are cold countries and they've shown that by dealing aggressively with COVID-19, they could slow or stop the virus too. China has shown very few cases recently despite it seeming out of control at one point. Korea, which does have a high case count, (probably influenced by aggressive testing), has shown a very low death rate.

The Effect of Testing

What about the effect of testing? There is some thinking that the second order things we?ve talked about are also important. For instance, it might be possible that there is more testing in cold countries than warm countries. We haven't found reliable data on this for all countries, which would be required, but it is a reasonable thing to consider. Note that we did show a consideration for this by doing a per capita GDP analysis, below.

Another reader asked us about what will happen to the Southern hemisphere in July and August. So, we decided to do that analysis as well. Australia concerns us a lot because it has 1,353 cases and will be heading into winter shortly. In Australia most of the population lives in areas where the temperature will be below our fifteen-degree threshold in its coldest month of July.

However, on a further analysis we found that much of the rest of the southern hemisphere population will actually be defined as warm even in the months of July and August. To wit, only nine southern hemisphere countries, representing 2.7% of the world's population will be colder than fifteen degrees, and classified as a cold country in the month of July. July is typically the coldest month of the year in the Southern Hemisphere. If we were to include northern hemisphere countries that will still be below fifteen degrees in July, such as Russia and Iceland, then we can see that 6.9 percent of the world's population will be cold in July.

Chart #3:  Percent of Global Population Living in Countries that will be Cold in July


The Effect of Per Capita GDP on Case Counts

Further thinking about "second order considerations" we wanted to look at GDP to see if maybe the colder countries had higher per capita GDP and this was leading to higher COVID-19 case counts. One might argue that this would have led to more travelers to the cold countries, a situation where better healthcare exists, and a situation where more tests have been conducted.

All of these are certainly possible and would push against the idea that temperature itself, or some corollary of temperature is supporting the lower case counts in warm countries.

It is indeed a possibility that the virus simply spread "first" in cold countries and it will spread in warm countries next.

Still, we feel that 96.0% of all cases being in cold countries can't be seen as insignificant at this point.

We think that the numbers are telling us four things
A.  The spread seems to be faster in colder weather (for whatever reason),
B.  The virus can spread in warm countries but seems to spread slower (for whatever reason),
C.  The virus can be "beaten" in both warm and cold countries with the right intervention,
D.  The summer months are likely to "help" the slow of the spread at least for a few months in Europe and North America, but it will certainly help if Europe and North America continue to take aggressive containment measures.

Separately we think that data is showing that countries that test and treat coronavirus patients in separate "coronavirus only" facilities do much better at containment. Protecting elderly in hospitals and in retirement homes is vitally important to success. This is a topic for another article.

Comments about our analysis are welcome at the email below. 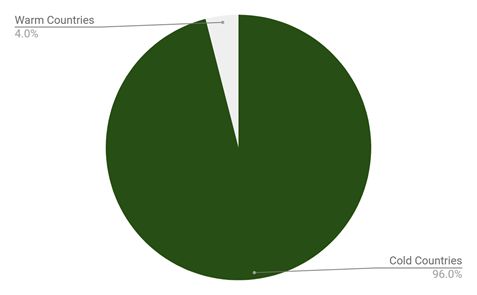 TOKYO, Mar 24, 2020 - (ACN Newswire) -  On March 6th Azabu Insights proposed a theory that coronavirus seemed to be spreading faster in cold countries than in warm countries. We followed this

ScoopAsia
—
Azabu Insights: Update on Temperature's Impact on the Coronavirus
Share this