HONG KONG, Mar 3, 2020 - (ACN Newswire) -  CIMC Vehicles (Group) Co., Ltd. ("CIMC Vehicles" or "the Group"; stock code:1839.HK) has announced that to fight against the nationwide outbreak of COVID-19 in China, the Group has observed the requirements set by Party Central Committee, the State Council and the nation, and fully utilized its global operational advantage to procure and deploy resources to support frontline operations. The Group believes that by moving forward on two fronts by concentrating on epidemic prevention and control as well as resumption of employment and production operations, the nation will succeed in overcoming the virus. Besides, Seven provinces and cities in Mainland China have announced the launch of infrastructure projects valued at RMB25,000 billion yesterday. The Group believes that more related policies will be launched in the near future and will be beneficial to its truck body business for specialty vehicle, such as cement mixers and dump trucks.

Responds to the country's appeal and contributes to relief work by utilising its business strength
As a leader in the global semi-trailer industry and a giant in China's semi-trailer sector, CIMC Vehicles has responded to the nation's appeal and immediately taken actions after the virus outbreak by capitalising on its leadership advantage and its own strengths. Strictly adhering to the principle of "Early Deployment, Early Prevention & Control and Early Implementation", the Group has promptly set up a contingency group to prevent the spread of the virus within the Group internally and secured and deployed materials from and to all sides externally. Its Shenzhen headquarters and all member companies in different regions across China have also kicked off the contingency decision-making system within a short time, hoping to join forces to counter the epidemic.

Work in partnership to support construction of Huoshenshan and Leishenshan Hospitals
To ensure the effective implementation of disease prevention measures, Mr. Li Guiping, Chief Executive Officer and President of CIMC Vehicles, has personally coordinated and guided the virus prevention work. The Group has secured resources from all sectors, led various initiatives and monitored the epidemic prevention and control work of the Group's subsidiaries in different regions. Also, to complement the decisions made by the Wuhan

Municipal Government on 23 January and 25 January to build the Huoshenshan Hospital and Leishenshan Hospital, companies under CIMC Vehicles worked against the clock to provide highly effective and safe products produced by the Group. The Group have supported the Wuhan Government in its construction of these hospitals within a short period of time. Ruijiang Automobile owned by the Group have quickly gathered 10 concrete mixer trucks and formed a construction support team with local contractors to undertake the task of transporting concrete for the construction of the hospitals. It was the first mixer truck fleet to join the fight against disease. CIMC Huajun, another subsidiary of  the Group, also gathered 30 smart muck trucks and formed another construction support team with local contractors. The team took charge of earthworks in the construction of the hospitals and conducted maintenance and repair the muck vehicles used in construction by providing after-sales service. Subsequently, CIMC Huajun set up another team to deliver medical products which have been in short or tight supply to Wuhan. In the course of national epidemic prevention, the Group strives to contribute its efforts to protect the lives and health of people via its leading position in the transportation arena.

Facing the shortages in virus prevention and protection equipment, companies under the Group have also realised the spirit of mutual support to deploy and collect materials for the country. For example, Ruijiang Automobile conducted cross-border face mask procurement in Myanmar, Vietnam and Laos and donated the first batch of 5,000 masks purchased in Laos to Yijiang District of Wuhu City. Such a move has helped to alleviate the material shortage in the city. CIMC Dongyue and Shandong Wanshida quickly raised RMB100,000 to Liangshan County Charity Federation, to contribute to the prevention of the epidemic's spread and treatment of the disease by utilising the production base of specialty vehicles in China at such difficult times. Lingyu Automobile also liaised with relevant departments, mobilised people and supported logistics companies to send three hazardous chemical tanker trucks to deliver medicinal alcohol to hospitals in Sichuan Province.

Its headquarters resumed working remotely from home as much as practical on 10 February, which not only improved work efficiency, but also effectively reduced the risk of spreading the epidemic. Its subsidiaries also gradually resumed operation one week later. CIMC Tonghua and Lingyu Vehicles overcame obstacles and delivered the first batch of tanker trucks to clients located elsewhere and Shandong CIMC adopted a community marketing model, and sales staff boosted sales through live broadcast. Shaanxi Vehicle CIMC has launched the "Royal-style" vehicle pick-up and taking-out services and online repair registration services to reduce the risks relating to the spread of the virus. CIMC Huajun has launched "contactless" vehicle pickup services to avoid the possibility of people gathering. To solve the transportation bottleneck of staff returning to companies from their hometowns, its subsidiaries CIMC Tonghua and Yangzhou Human Resources and Social Security Bureau cooperated to provide pick-up services for staff. They are also entitled to subsidies. This arrangement has provided one-stop services to the staff. As at 28 February, companies under CIMC Vehicles have gradually increased the rate of resumption of operations. Factories of CIMC Tonghua, CIMC Huajun, Qingdao CIMC, Zhenjiang CIMC, Dongguan Special Vehicle, Ruijiang Vehicles and Lingyu Vehicles have resumed work and production. At the same time, factories are reserving their capacities to recruit staff, coordinate sales and supply chains and logistics channels, so as to tap opportunities in the market.

Fulfil corporate social responsibility and steadily march forward in the industry
CIMC Vehicles remains committed to fulfill its corporate social responsibility. Through various anti-epidemic measures, it has strived to achieve its goal of "resuming production without gaps, delivering products without delay", so it can steadily develop its business in the industry. Its Chief Executive Officer and President Mr. Li Guiping has stressed, that the Group has set up specific solutions against the risk of default and customer relationships in the short term. It is highly concerned about the contingency plan to manage the supply chain. The Group will continue to shoulder its social responsibility, manage its relationships with its stakeholders, and take sustainability into account in its decision-making. The management deeply believes that after this epidemic ends, the importance of logistics will become even more obvious, which will benefit an upgrade of the industry, production and products, and has confidence in the Group's long-term development. As usual, CIMC Vehicles will give back to society through its actions and resolutely fight the epidemic together with all people in China.

SINGAPORE, Mar 3, 2020 - (ACN Newswire) -  BitDeer.com is launching a massive event for new users and its loyal mining community starting from today to celebrate the arrival of spring. BitDeer. 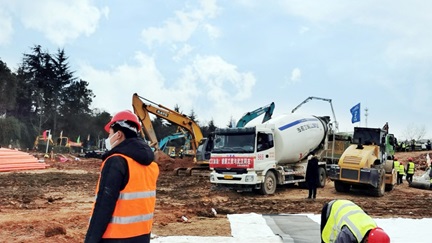