HONG KONG, Mar 10, 2020 - (ACN Newswire) -  This famous Chinese saying is believed to be the true portrayal of every successful company during its development phase. Standing on the top of the world, those are the companies that have undoubtedly succeeded more than their competitors to reach the peak.

EuroEyes opened its first ophthalmology clinic in Hamburg, Germany in 1993. From the company's beginning, EuroEyes has combined technological innovation with exceptional service as it established itself as a leader in the field of ophthalmology and vision correction. As early as in 1986, Dr. Jorn Slot Jorgensen, the founder and chairman of EuroEyes, provided outpatient cataract surgery in Hamburg. Over three decades later, Dr. Jorgensen continues to use world-recognised and advanced diagnostic technology and equipment when treating patients. For the past 26 years, under the direction of Dr.Jorgensen, EuroEyes, has led the industry in advancing vision correction treatments. The company was one of the first to use innovative technologies such as LASIK surgery and phakic lens (ICL) surgeries in the field. In 2004, EuroEyes began using the more advanced blade-free LASIK and in 2014, the company added ReLEx SMILE to its services. EuroEyes has also led the industry by being one of the first-movers to offer Zeiss trifocal lens exchange surgery as a standalone treatment option to presbyopia in its 26 ophthalmology clinics located in Germany, Denmark and China.

No. 1 in the world
Within the international ophthalmology industry, EuroEyes' achievements have long exceeded its peers. This is not merely reflected in its consistent top ranking in the industry for advanced lens exchange surgery and refractive surgery (excluding PRK / LASEK) in Germany and Denmark but also in the number of the cutting-edge vision correction operations performed. In 2018, EuroEyes was acknowledged by Staar Surgical for having performed the most phakic lens (ICL) surgeries in Europe.  EuroEyes was also recognized by Carl Zeiss for having performed the most ReLEx SMILE procedures in Germany and the most trifocal lens exchange surgeries in the world for five consecutive years. Carl Zeiss is the leading German manufacturer of optical systems and optoelectronics with 37.6% of its revenue generated from the Trifocal lens. The ZEISS award reflects EuroEyes' leading position in the global application of Trifocal IOL Implantation.

According to market analysis, the use of trifocal IOL implantation is an ideal treatment for presbyopia. Presbyopia usually occurs after the age of 45 when the eye lens loses its elasticity, making it difficult to focus on nearby objects. After the trifocal IOL implantation, patients with myopia and presbyopia can easily and clearly focus on near, medium and distant things without glasses. Furthermore, lens replacement surgery is an ideal treatment for cataracts eliminating the need to wear thick glasses or special contact lenses.

Huge opportunity for market growth as 560 million Chinese people predicted to have presbyopia by 2024
As people better understand the benefits of lens replacement surgery, the number of people undergoing the procedure around the world continues to rise. According to Frost and Sullivan, from 2014 to 2018, the market size of advanced lens exchange surgery and refractive surgery (excluding PRK / LASEK) in Germany and China increased at a compound annual growth rate (CAGR) of 9.3% and 37.8%, respectively. An aging population combined with an increasing desire for improved vision and quality of life, as well as increasing consumption power is motivating more and more people to undergo trifocal IOL replacement surgery. Industry analysts predict that from 2018 to 2023, the market size in Germany and China will expand at a CAGR of 7.2% and 29.5%, respectively.

According to the U.S. Census Bureau's 2019 refractive surgery market report, 50% of Germany's population have presbyopia while 36.4% of China's population have the condition.  With over 1.4 billion people living in China, approximately 505 million Chinese people have presbyopia. Industry analysts expect that by 2024, 39.6% of the population in China or about 557 million Chinese people will have presbyopia. Currently the penetration rate of the most advanced Trifocal IOL exchange surgery is very low in China.  In 2018, the penetration rate in Germany was 4.3 times that of the Chinese market. In other words, China's Trifocal IOL replacement surgery market has tremendous upside potential for growth.

Euroeyes has received the Zeiss Award for five consecutive years in recognition of the company's excellent lens exchange technology and equipment, strong brand, and exceptional German medical standards and quality. The company is well positioned to provide Chinese customers with international leading lens exchange surgery as it becomes the go-to vision- correcting source in China. EuroEyes is in the early stage of rapidly expanding in the Chinese market. The company's successful listing on the Main Board of the Hong Kong Stock Exchange Limited at the end of last year has provided them with the capital to open additional clinics. Within two months after listing, EuroEyes confirmed the expansion plan of two new eye clinics located in Chongqing and Fuzhou.  The two new clinics combined the previous six clinics in Shanghai, Beijing East, Beijing West, Guangzhou, Shenzhen, Hangzhou, brings the total number of Euroeyes' clinics to eight in total. The company intends to open two additional clinics in Chongqing and one in another top tier city in the future.

According to the company's financial report, revenue generated from China in 2018 was about 94 million Yuan, accounting for 28.2% of the company's global revenue. The CAGR for revenue and gross profit in the past three years were 85.1% and 633.7%, respectively. We are looking forward to announcing the full year performance for 2019! 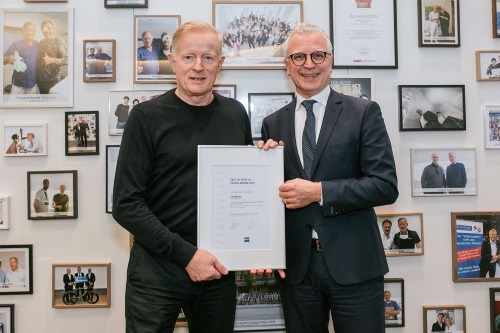 HONG KONG, Mar 10, 2020 - (ACN Newswire) -  This famous Chinese saying is believed to be the true portrayal of every successful company during its development phase. Standing on the top of

ScoopAsia
—
Leading the Industry in Germany for Years, EuroEyes To Provide China with Vision-Correcting Power
Share this