HONG KONG, Oct 27, 2022 - (ACN Newswire) -  With its tremendous development, the Guangdong-Hong Kong-Macao Greater Bay Area (GBA) offers endless opportunities to Hong Kong Youth. The "New Life in the GBA" lucky draw launched by the Greater Bay Area Homeland Youth Community Foundation (the Foundation) ran from April to September this year aimed to support the development of young people in Hong Kong in establishing new lives in the GBA. The lucky draw received positive responses from young Hong Kong residents aged between 18 to 45. All eligible participants held a valid Mainland Travel Permit for Hong Kong and Macao Residents, had successfully registered as a YO PLACE member and held a "GBA Youth Card". 521 prizes were drawn live at YO PLACE yesterday on 25 October.

We were pleased to have Mr Tommy Yuen Man-chung, Commissioner for the Development of the Guangdong-Hong Kong-Macao Greater Bay Area, Mr Bunny Chan Chung-bun, Hong Kong Delegate to the National People's Congress, and Mr Daryl Ng Win-kong, Chairman of Greater Bay Area Homeland Youth Community Foundation as the officiating guests, as well as Mr Nicholas Chan Hiu-fung, Honorary Legal adviser of the Foundation, Partner of Squire Patton Boggs and Mr Chris Mo Ying-wai, Partner of PricewaterhouseCoopers Hong Kong to witness the occasion. 521 winners were announced after the lucky draw, in which the Grand Prize winner received a decorated 3+1 bedroom residential apartment with GFA of 105m2 at Empyreal-Bay Zhongshan, valued at approximately HKD2.5 million, sponsored by Ng Teng Fong Charitable Foundation. Other prizes included 20 GBA living expenses spending credits of HKD20,000, and 500 GBA living expenses spending credits of HKD1,000, adding to a total of HKD900,000 being given away. Each of the rest of participants also received a transportation allowance of HKD100.

The Foundation Supports Hong Kong Youth in Embracing Development Opportunities in the GBA
With a total population of over 86 million, and an approximate area of 56 thousand square kilometres, the GBA is where the most open and vibrant markets are situated, and is of great significance to China's implementation of innovation-driven development and reform. According to the research data from the Hong Kong Trade Development Council, the GDP of the GBA has reached US$1,958.14 billion in 2021, showing extensive development potential of the GBA. Hong Kong has always been committed to integrating into the national development with the GBA as the entry point, in addition to consolidating traditional industries, the city has also strived to develop new businesses in innovation technology as well as art and culture.

Mr Tommy Yuen Man-chung, Commissioner for the Development of the Guangdong-Hong Kong-Macao Greater Bay Area said, "Over the past three years since the promulgation of the Outline Development Plan for the Guangdong-Hong Kong-Macao Greater Bay Area, we have witnessed the continual development of the GBA. Many Hong Kong young people are taking the opportunities to work and develop their career in the Mainland cities of the GBA. The latest Policy Address has announced the regularistion of the GBA Youth Employment Scheme to encourage participating enterprises to recruit and deploy local university graduates to work in Hong Kong and other Mainland cities of the GBA, so that young people can better understand and grasp the opportunities of GBA development, enhance their awareness of the country's development, and fulfil their dream."

Mr Daryl Ng Win-kong, Chairman of the Greater Bay Area Homeland Youth Community Foundation said, "The Central and Hong Kong government have always placed great importance in the development of Hong Kong youth within the GBA. As announced in the Policy Address last week, the Hong Kong government would set up a "Steering Group on Integration into National Development" to carry forward more cross-border initiatives, enhance communications with Mainland authorities and formulate strategic plans for Hong Kong to dovetail with the "14th Five-Year Plan" and the GBA development. With such immense opportunities, the Foundation will continue to organise diverse activities to encourage Hong Kong youth to seize the opportunities in the GBA while leveraging on the advantages of "One Country, Two Systems", and at the same time contribute to the development of Hong Kong and Mainland China."

The full winner list has been published on the website of the Foundation (www.gbayouth.org.hk) and YO PLACE (http://www.yoplace.org.hk/) on 26 October. 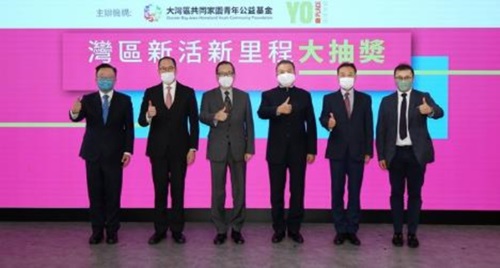