MM has a very interesting background and the brands have gone through 3 different ownerships before settling with MM. I joined the organization in 2003 where Au Bon Pain was in the initial stages of expansion and Dunkin' Donuts was a dying brand with the stores and the staff were looking poor but thankfully the product was very good. We came up with several initiatives to turn this around.

In the past Dunkin' Donuts used to be in 2,000 7-11 stores which was a mistake for the brand as it was loss making due to the business structure and in fact it should be focused on the core business which are its stores. So, we cancelled this agreement, invested in upgrading the stores, the uniforms, the systems and adjusting the ordering system to be more a buffet, self-service which encourage consumers to purchase more items. These are just some of the initiatives which drove Dunkin' to the profitability and scale that it is today.

But at the time it was not enough, and investment groups came in to recapitalize the business which allowed for us to grow the Au Bon Pain franchise to scale. In 2012 Sub Sri Thai became the major shareholder and they are here to stay, the vision of our Chairman is that he loves the food business, wants to grow it and to bring in more brands.

After six months we became the franchisee for Baskin Robins which was a risk at the time because MM was the third franchisee in Baskin Robins lifetime in Thailand and it was another turnaround situation where we had to close non-performing stores, refresh the remaining stores, and focus only upon specific locations to bring it to a positive cash flow.

MM then had three franchise brands and we decided that the best strategic decision was to have our own inhouse brands either organically or through acquisitions, and this led us to Greyhound. Here the vision was simple, MM won the bid for Greyhound not because we bid the highest price, which we did not, but because we understood that Greyhound as a brand has a built-in emotion which is priceless, like Nike and Apple and that the brand extension potential is incredibly vast. The founders are creative people, artists and I told them that this is brand that should go global.

So, with Greyhound Cafe we expanded to Hong Kong, Singapore, Indonesia, Malaysia, we have just signed Vietnam and Japan and are looking at Taiwan and the Philippines. We understand Asia well and then decided to go to Europe, specifically London which took us a couple of years with several challenges as we had limited on the ground knowledge, but I think that next year our London location will be doing very well.

After London an opportunity arose for us in Paris to acquire Le Grand Vefour. This is a 2-star Michelin landmark in Paris, overlooking the gardens of the Palais Royale, it is where Napoleon proposed to Josephine. The owner of the restaurant, Chef Guy Martin, was looking for a partner to acquire the restaurant and to do further development with him which was a perfect fit for MM. Together we acquired our first bistro, La Mere LaChaise, we are currently working on a second and third one and things are progressing very well. And this is the history of MM, from 2 brands, we expanded from 2 brands to a total of 14 brands, 11 of which are ours and 3 are franchised.

The fashion business has turned around and is profitable now, we reduced the high inventory and stores that were not profitable but we want to keep the core flagship stores open, such as the one at Siam Paragon that is doing very well, as a show case for the quality design and ideas that the team creates. An example of the creativity of the team is that Honda Motorcycles which has 40 agencies in Thailand approached the Greyhound team to reimagine the stores, clothing and to create a coffee bar concept. This is how Greyhound Coffee was born, and today we now have 16 locations and there is an opportunity to expand in the remaining agencies and perhaps outside of them in the future. Also K. Bhanu and his team were approached by IKEA to create and design products for the kitchen and household and now this is being showcased in IKEA Europe. So, as you can see the creative quality of the team is there and we are working closely together as a team to integrate the creative great designs into the F&B stores as well.

TET: How has the F&B landscape changed in Thailand and how does MM position its brands?

With Dunkin' we are going into a coffee direction, in the US they have removed the word "Donut" and are aggressively competing with Starbucks, initially focusing on coffee drip and now into expresso's which are being promoted around the world to their franchises. Since last year we began adopting the new strategy, adjusting the stores towards the coffee concept with a darker mood, including breakfasts, donuts and muffins. We have kept the transition quiet as 150 of the 300 stores have been converted, but once they are completed you shall see us making noise. The coffee that we use at Dunkin is really good as it is a blend of 30% Kenyan Beans and 70% Thai Arabica beans. For Thailand we think that the country is still at the beginning of the coffee culture because when looking at the data consumption per capita is still low at 1 kg whereas in the US it is 5-6 kg and in Europe it is 7 kg per capita.

Also with our own brands, we have launched new brands such as "Kin-Hey" with the first branch opened at Groove targeting white-collar workers, priced below Greyhound Cafe, it is mix of a Thai Izakaya style and the feedback that we have received from customers has been positive and the future looks very favorable.

Another new brand is Gai Hound, which is organic chicken rice where we work closely with an organic farm, the first pilot store is located at Central Embassy and this is also performing very well selling more than 100 plates per day.

Going forward we decided to no longer franchise new brands because we are in a situation where we have garnered the knowledge necessary, built the teams and where we can drive towards a brighter future. With Dunkin' as our cash cow and Greyhound as our hero brand we will have to continually develop it aggressively both domestically and internationally as I see a lot of potential for Greyhound.

TET: What is the future for F&B in Thailand?

The future is all about product development, an easy example is After You they create unique products constantly and do not just rely on their past success. Greyhound is the same by creating unique twists on the staple foods in Thailand or launching a chicken rice that now uses organic chicken. With Dunkin' we launched a Takoyaki style Donut to attract people to the store. The cycle is now becoming shorter for new product launches because the consumer gets bored quickly, but what is interesting with consumer behavior is that they will still stick with their favorite food.

For example, with Dunkin' the glazed Donut is our best seller and continues to be, and when we launch a new product our customers will buy the new product to taste it in addition to buying their favorite. And so, with this change, the former way of forecasting projections for five years does not work anymore, everyone must challenge themselves to be more creative and create a variety of products.

Internally we have a Corporate Chef whose expertise is in bakery and pastry and he's incredibly busy working with the team and outsourced teams to research future products and the trends around town. The future of F&B in Thailand is very bright, it is currently ranked #9 in the world but in five years it is projected to be #6 in the world.

TET: MM recently announced a share buyback. What are the reasons for this?

We were of the viewpoint that the share price of the company was mis-valued in the market and utilizing the financial management tools which are at our disposal we announced a share repurchase program with a maximum budget of 100 million baht, not more than 20 million shares until March 2020.

TET: What impact have the Government Polices had upon your industry and business?

Whilst we applaud the government for being proactive in wanting to make Thailand a healthier place for its citizens their approach to this can be improved. For example, with the Transfat policy, the government has to approach the suppliers of the materials that restauranteurs and street food vendors use, and not just target the restauranteurs themselves. Because of our volume we were able to have the suppliers change their oils to transfat so now all of our donuts are transfat but in Thailand you still have millions of street vendors that are re-using old oils all the time and so the effective solution is to ensure that the suppliers change and not just the restaurants.

Thailand's real strength is in its food, the Thai people are incredibly creative, and I believe that Thailand is fantastic for F&B and that it will still grow and develop. One can see that there are young generation Thai's returning from overseas and want to focus on artisanal products whether it be sausages, chocolate, and rice and these all taste better than what their peers may make in Europe and neighboring countries.

TET: What are the biggest challenges for MM?

The F&B industry is an exciting one with constant multiple challenges. Today with the advent of technology has presented a new challenge where you now have restaurants, where it is a ghost restaurant with only a kitchen and working with the aggregators, no rent, minimal staff and just cooking.

However, on the other side you have the consumer today who is very different from the consumer just five or ten years ago. They are more demanding now as they have travelled the country, the region, the world, they want to taste different things and have new experiences all the time.

Further to this Thailand's economic condition has been weak for the past few years and we are not immune to this with some stores exhibiting negative double digit declines, and with the malls increasing the F&B from 20% to 40% of space it has created a lot of competition and combined with decreasing foot traffic creates a difficult situation for all involved. These are just a portion of the challenges today and it is an exciting time to learn and to develop ourselves in a way that benefit from these trend changes.

TET: Where do you expect to see MM in the future?

We will continue growing from the 500 stores that we have today. Given that several of the senior management also have a hospitality background I would not be surprised to see additional business channels in the hospitality sector where we can create a more personalized experience combining food, lifestyle and hospitality because it fits. France, for example, has thousands of chateaus which have 10 rooms and great restaurants. This company has a long future before it reaches its ceiling, we want to have more brands and meaningful experiences.

About The Executive Q&A Series

The Executive Q&A Series is presented by ShareInvestor, Asia's leading financial internet media and technology company and the largest investor relations network in the region. The interview was conducted by Pon Van Compernolle. For more information, email admin.th@shareinvestor.com. Website: www.ShareInvestorThailand.com

TOKYO, Oct 10, 2019 - (JCN Newswire) -  The Toyota Mobility Foundation (TMF) is calling for research proposals from Japan for 2019 under the Hydrogen Research Initiative established in 2017.This initiative is 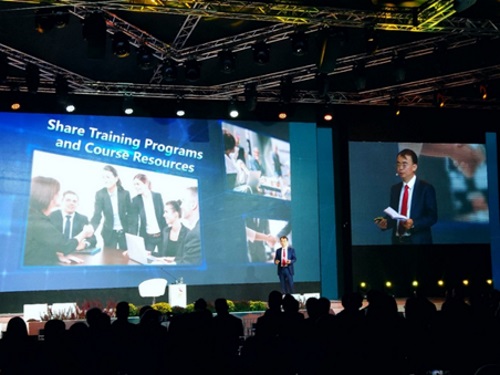