Andreas Schleicher, Director for the Directorate of Education and Skills, OECD and Head, Judging Panel, Yidan Prize for Education Research

The Vice-Chancellor, Professor Stephen Toope announced officially that Cambridge would be creating a new role – Professor of Psychology of Education and Learning Studies in its Faculty of Education.

This year's Yidan Prize Conference Series: Europe 2020 honored the achievements of the Yidan Prize for Education Research Laureate 2019, Professor Usha Goswami, and also honored the work of the Yidan Prize for Education Development Laureate 2019, Sir Fazle Hasan Abed KCMG. He died in late December 2019. Sir Fazle was the Founder of BRAC, one of the world's largest non-profit development organizations, which currently operates across 11 countries in Africa and Asia and has set up hundreds of early childhood development centers, where close to 40,000 children are presently enrolled.

"The 2019 Laureates represent two very different approaches to ensuring that our children go on to lead happy, productive lives, but they also intersect. Both point to the need to achieve a better, deeper understanding of children's needs. Through their work, we now see promising ways to help millions of lives around the world. With technology, and active participation of our partners on this global platform, we can inspire hope for our future generations." Dr Charles Chen Yidan, the founder of the Yidan Prize said at the conference.

The University of Cambridge's Vice-Chancellor, Professor Stephen Toope said that the university had a 'critical' role to play in addressing the challenges of mental health, and it goes to the heart of what we stand for as a center for research and practice in education.

Professor Pauline Rose, Director of Research for Equitable Access and Learning Center, the University of Cambridge, said that inspired by the achievements of Sir Fazle, this year's conference discussed what works in education for the most marginalized communities.

"BRAC since the 1980s has been a world-leader in this area. BRAC's impact seems to stem from the fact that they gather evidence about their effectiveness and adapt their programmes accordingly, which helps to make their work adaptable and replicable in other countries. At the REAL Centre at the Faculty of Education, we have carried out assessments that suggest that similar reasons lie behind the success of another organization, CAMFED, in supporting the education of marginalized girls in Tanzania," she said.

BRAC IED's Executive Director Erum Mariam attended the conference. She said Sir Fazle dedicated his life to serve the needs of people living in poverty all around the world. Among his many contributions, he is best known for making girls' education a priority in Bangladesh with women as the drivers of change.

"Sir Fazle scaled a unique non-formal primary education model in every district of Bangladesh maintaining a strict policy of opening a one room school only if 70 percent of the students are girls. Started in 1985 BRAC's s non-formal schools have had six million graduates who would have otherwise been left behind," Erum Mariam said.

Professor Anna Vignoles from Faculty of Education, University of Cambridge, hosted a panel discussion on children's mental health. She found that there is a growing global awareness of the mental health needs of children, and a growing consensus that mental health is an important indicator of the success or otherwise of any society.

"Children in particular experience a range of problems and challenges, including poverty, abuse, bereavement etc. Evidence from the World Health Organisation survey suggests that around a third of all mental health problems are down to such childhood adversities. We need to be clear what the main factors causing any increase in young people's mental health problems are, and the extent to which they really can be addressed by schools, rather than requiring a wider societal response. Second, we need to have far better evidence on what kinds of interventions are effective in a school setting, and reassure ourselves that schools are indeed the right institutions to be tackling the problem," Anna Vignoles said.

"We look forward to finding many more innovative solutions through working closely with educators who share our passion and determination to build a more inclusive society for everyone. Together, we can transform great ideas into meaningful actions. It is on the notion of the need for closer collaborations and collective impact that we curate these debates to create a new philosophy for the future of education," Dr Charles Chen Yidan said.

At Yidan Prize Conference 2020, Professor Toope announced officially that the University of Cambridge would be creating a new role - Professor of Psychology of Education and Learning Studies, which will be based in its Faculty of Education. The new post will strengthen existing research into how better to support young people's well-being and mental health, in particular through the education system.

The first post-holder will be Professor Gordon Harold, currently at the University of Sussex, who has led several, field-changing studies into the relationship between domestic adversity and young people's mental health, enabling schools and teachers to do more to support pupils with depression and anxiety.

The conference was broadcast live online to encourage educators from around the world to participate in discussions on important educational issues.

About the Yidan Prize

Founded in 2016 by Dr Charles Chen Yidan, a core founder of Tencent, the Yidan Prize has a mission of creating a better world through education. It consists of two awards, the Yidan Prize for Education Research and the Yidan Prize for Education Development. Yidan Prize Laureates each receives a gold medal and a total sum of HK$30 million (around US$3.9 million), half of which is a cash prize while the other half is a project fund. To ensure transparency and sustainability, the prize is managed by the Yidan Prize Foundation and governed by an independent trust with an endowment of HK$2.5 billion (around US$323 million). Through a series of initiatives, the prize aims to establish a platform for the global community to engage in conversation around education and to play a role in education philanthropy. 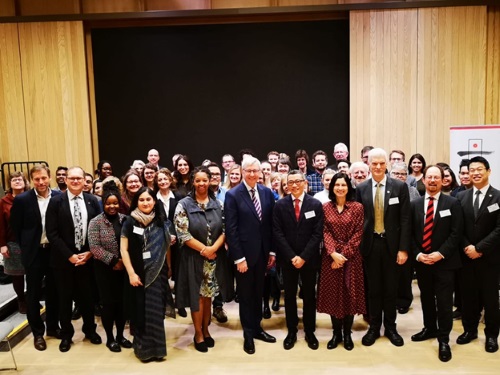