SYDNEY, Feb 8, 2022 - (JCN Newswire) -  Yesports has teamed up with Team Empire, Renegades, Talon Esports, BOOM Esports and Fact Revolution ahead of launching the world's first Web 3.0 Esports Engagement Platform (W3EP). The teams will be the first to debut their very own NFTs on Yesports. Yesports offers a Web 3.0 white glove service for esports teams that includes NFT design and launch support, as well as an NFT marketplace for teams and fans to engage with each other. The platform's long term vision is to deliver an unrivaled esports-centric Web 3.0 platform through which fans can eventually participate in the emerging metaverse.

Seeking to onboard millions of esports enthusiasts to Web 3.0, Yesports is designed to encourage fan participation through greater engagement with Esports teams and allow tangible ownership of valuable and rare utility-first esports assets.

Yesports partner teams stand to gain access to a dedicated team of creators and strategists as part of the white glove service to help them design and build high-fidelity NFTs for their fans, as well as to ease their transition into Web 3.0. The teams are currently in the creative process of developing NFT packs, which are akin to virtual versions of physical trading card packs. These card packs will soon be available to fans of the respective partner teams.

"With our partnerships, Yesports becomes the world's largest esports-focused NFT marketplace with over 16.5 million fans from the get-go and represents the beginning of a new generation in esports fan engagement - one that takes place in Web 3.0. We are excited to deliver real-world utility into the NFTs themselves and give them a multitude of functionalities well beyond just a beautiful collector's item," said Sebastian Quinn, CEO of Yesports.

The marketplace, built with a grant from Polygon Studios, creates a new, highly curated and focused venue for teams to release unique generative NFT packs or one-of-a-kind NFT collectibles on dedicated virtual team storefronts. Users can also expect to enjoy first access rights to exclusive NFT drops, multi-asset staking rewards as well as governance and voting rights by holding the YESP token, which will power the marketplace. Fans will also be able to buy, sell and trade various esports-focused NFTs all in one place.

Some examples of the perks that Yesports is exploring to provide holders of exclusive NFTs include community incentives like VIP access to private Discord servers, signed merchandise, and exclusive video content. Player AMAs, team training live streams as well as opportunities to play along with the team are some other examples of what is currently being explored with partner teams.

The esports sector is growing rapidly, and its global market revenue is projected to hit a staggering $1.62 trillion by 2024. The market also boasts one of the highest levels of engagement, with the global live-streaming audience projected to grow at a rate of 7.7% annually to pass the half-billion mark in 2022 and reach 577.2 million in 2024.

To commemorate the five partnerships, Yesports will be releasing Partnership NFT Collectible giveaways this week for each team, which unlock special fan access and perks. These NFT Collectibles are just a taste/teaser of what's to come for when the Yesports marketplace launches with the exclusive drops.

For more information on the giveaway and company updates, follow Yesports here. https://twitter.com/Yesports_gg

Yesports is the World's First and only Web 3.0 Esports Engagement Platform (W3EP), offering a white glove service onboarding esports teams and their fans to Web 3.0, including NFT design and go-to-market strategy as well as an esports-centric NFT marketplace for teams and fans to engage. The platform's long term vision is to deliver an unrivaled esports-centric Web 3.0 platform through which fans can eventually participate in the emerging metaverse.

Established in November 2016, BOOM Esports is a multinational, multidivisional esports organization with top-tier rosters from Southeast Asian regions. We were born from our belief that champions are not born, they are made. They are made from those who thrive for nothing short of greatness: those who thrive to be a beast.

With the "Beast on our Mind" (BOOM), it has always been our mission to find and support the world's most promising talents with professional management and reach the highest levels of competitive gaming.

Founded in 2015, Renegades is a global premier multi-gaming esports organization featuring professional players and teams in the world's largest competitive games. Breakout performances in Counter-Strike: Global Offensive, Rocket League, Call of Duty, Apex, and Valorant have helped launch Renegades into becoming one of the most prominent and recognized sports franchises around the world.

Talon is a leading esports, culture and lifestyle platform in Asia, with headquarters in Hong Kong. Regional offices are located in Thailand, Taiwan, the Philippines and South Korea. Talon was established in 2017 and operates seven professional esports teams in five markets and has accolades of over 30 tournament wins. Talon operates its own creative studio to run the industry-best esports marketing, content creation, and activities for Talon and its partners. For more information visit talon.gg.

Team Empire is a professional esports organisation with world-class Rainbow Six, Dota 2 and Apex Legends squads, and a total reach of 52+ million Empire players and viewers. Established in 2004. Team Empire has become one of the esports world leaders. Team Empire has a long list of leading esports games, with top tournaments achievements from all around the globe. Team Empire's main goal is the popularization of esports in CIS countries. Their philosophy is formation, support and development of talented pro-gamers from Europe and CIS. 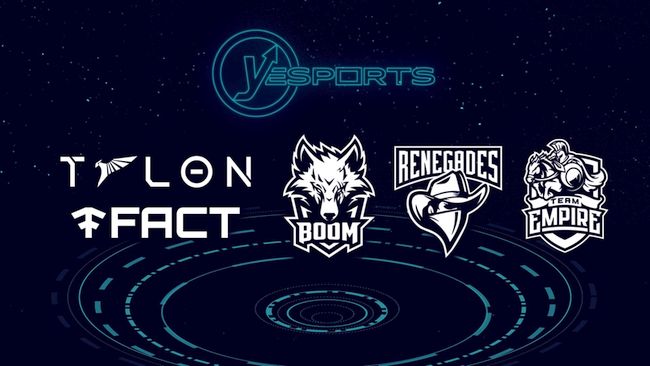